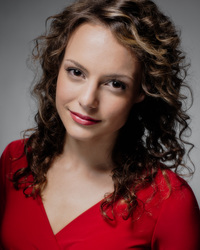 Sarah Wasserman has had great success singing the roles of operetta’s heroines in H.M.S. Pinafore (Light Opera Works), The Merry Widow (Light Opera Works), The Girl In the Train (Chicago Folks Operetta) and Princess Ida (The Gilbert and Sullivan Opera Company). Sarah is a dynamic performer, comfortable in both classical repertoire (Grant Park Music Festival Apprentice Chorale, Floating Opera Company, Young Amelia in the Chicago premiere of Hagen’s Amelia at Roosevelt University) and musical theater (A Marvin Hamlisch Songbook at Theo Ubique, Gershwin’s Greatest Hits at Light Opera Works). Sarah holds a MM from Roosevelt University, a BM in Vocal Performance from Wheaton College.  She is currently on faculty at the Latin School and Metropolis School of the Performing Arts.

When I came to  Rebecca, I was initially concerned with learning musical theater technique because I had been trained classically and could fake the style, but I wanted to make sure I was singing it healthily and correctly. In our first lesson, she addressed several things quickly, and it felt so much better to sing that kind of rep. I soon found out that she could help me with my classical rep as well! In fact, I believe there was one day when we worked on "At the Ballet" for a show I was in and a Gilbert and Sullivan piece for my next audition. She moved between the genres easily and has a great ear and knowledge of the styles. She also communicates what she wants very well. If there is something I am not quite getting, she is quick to find another way to communicate that technique until I've got it. The best part is that because of lessons with Rebecca, I can switch between genres and sing healthily and enjoy it!